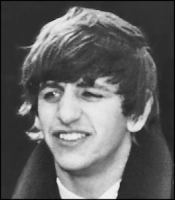 I bounded into the local supermarket with unbridled joy. Work was done for the day and it was time for pie. Apple to be exact. I was on the hunt for a Tastykake apple pie. I sniffed the air. To the back of the store! That’s where I would find my quarry.

I walked briskly down to aisle 9 making a sharp right turn. My prize would be at the end of the row. Excitement rose in my blood as I thought of my first bite of apple pie goodness. I reached the display but before I could look for my confectionary Taj Mahal I saw something unusual out of the corner of my eye. Entering the paper goods aisle, it was Ringo Starr!

One of the Fab Four; a real, true mop top was in my lowly local grocery store. I ran pell-mell to aisle 7 and almost barreled right into the world’s luckiest drummer. Being an idiot I spewed words out at the man without thinking. “What was John really like? What the hell does Yellow Submarine actually mean? What do you consider your greatest triumph; playing Shea stadium or marrying Barbara Bach?” I had grabbed a stock boy and torn his apron off for Mr. Starr to autograph when a harsh realization hit me like a punch to the stomach right after eating 3 helpings of four-cheese lasagna.

The man in front of me was not Ringo Starr: Just an ordinary man with an in-cred-ib-ly BAD haircut. Wow. I made my exit with as much dignity as I could, running down the aisle mumbling “How do you walk around like that in 2012 and NOT be Ringo Starr? Who wears their hair like that?”

With that distraction out of the way I went to snag my pie. The disappointment of not meeting a former Beatle still hung on me like summer-time humidity when I saw . . . there were no apple pies. Before me stood a tower of cherry, a tower of lemon, a tower of peach and a messy pile of éclair, but not one apple. Was I to be spared no indignity in this market?

Glumly I shuffled around the store, completely lost in my despair. I questioned why God even invented apple pie if I was to be denied in my time of desperation. My internal whining was close to critical mass when inspiration took me out at the knees with a cross body check. Little Debbie makes apple pies! They’re a little sugary for my taste, the glaze on the crust making my heart beat like a humming bird, but they’re good in a pinch.

I raised my head again, proud and cock-sure, marching to the Little Debbie display with spring-loaded steps. I reached for my pie . . . and there were no apple, only 2 cherry and about 20 blackberry.

No one likes your blackberry pies.

An irritated customer who wanted an apple pie

Before a major depressive episode set in, my broken and malfunctioning brain reminded me that the store sold its own brand of individual pies up front. The taste was less than a Tastykake pie but greater than a raw apple wrapped in a piece of shoe leather.

Having been bitten twice by the mosquito of disappointment I walked timidly to the front of the store to find the display of 10 for $10 pies. The large box that held the individual smaller boxes sat almost empty save for 4 cherry pies. No apple. In the entire store there was not 1 apple pie.

Defeated, I went back to the Tastykake display and selected a different pie: A baked 2nd place medal that I would choke down with reserved joy. The store dealt me a final blow when I ran into Not Ringo Starr one more time. He handed the stock boy’s apron which he had signed. I looked at it. It read Dilbert MacGuffin or Dan Milton or maybe Cyrano de Bergerac, who knows? I thanked him out of learned civility, paid for my not apple pie and left the store.

I walked to my car humming “With a Little Help from My Friends” and dreaming of a world that never runs out of apple pie.

Posted by Ragnar at 7:25 PM No comments:

Ladies and gentlemen, welcome to a very special edition of Cosmic Overdrive. Yes, this is my 176th post! What a milestone!

Thank you, thank you. It’s great to still be here haunting the interwebs. I remember back in the beginning when commenter “grubworm46” said “What the hell is this?” And who can forget “anonymous” and their witty remark “I don’t like this blog” followed by my snappy rejoinder “screw you”. With that inauspicious beginning who knew I would still be here blathering on like a chipmunk on chestnuts infused with crystal meth and guacamole.

176 posts and it could have been so many more if I wasn’t so lazy. As Fleetwood Mac once sang, “Don’t ask me what I think of you, I might not give the answer that you want me to. Oh well.”

Our celebration includes a big party here at Cosmic Overdrive headquarters. All of my favorites have shown up to help me commemorate the moment: Newt Gingrich brought veggie dip made out of sweat and lies I believe; Michelle Bachmann has been hiding behind a rhododendron all night shooting accusing looks at everyone; Mitt Romney came in then left, came back in, left again, came back, left and then we locked the door; Glenn Beck, an old buddy I haven’t heard from in a long time dropped off a boysenberry pie, shed some tears, told me I was a danger to myself and others, accused me of being a communist and the last I saw him he was in the bathroom cutting his hair with an oyster knife and mumbling “Why doesn’t anyone like me, mommy?”

The employees from Office Max stopped by to annoy me and the manager of the local super market tried to sell me wicker furniture that smelled like the freezer section of his store. The ants that plague my life every summer marched in and made off with Glenn Beck’s pie while friends and family members that I’ve mentioned occasionally in the blog presented me with a cease-and-desist letter.

All in all it’s been an amazing night. The bunting is still swaying in the air conditioning, the lunch meat platter has plenty of pastrami, the pickles are bold and saucy and my prepared speech wasn’t booed until the 86th minute when I used the word “festoonery”.

I hope you’ve enjoyed episode #176 of Cosmic Overdrive and will come back for #177. What will it be about, you ask? I have no idea.

Posted by Ragnar at 4:34 PM No comments:

Let’s look at the Republican primary tote board:

Santorum: too many
Romney: northern states and island protectorates
Gingrich: his home state and Paul: nothing

I get not voting for Romney. He only has other people’s ideas (and they’re all bad). He can’t think on his feet, he flip flops on issues in a matter of hours, he’s a terrible liar, a major-league panderer, tries too hard, looks like a middle school math teacher trying to be cool.

Gingrich is even easier not to vote for. The slime drips from his reptilian skin in buckets. He has a rich history of ineptitude, arrogance and, well, just being Newt.

That brings us to Santorum. Why oh why are people voting for him? It didn’t bother me when he “won” because its one state that puts too much importance on its vote. But he has continued to win states, continued to win delegates. This man is medieval. His presence on the national stage is a vile pronouncement to the world that we are a backward country who is willing to vote for a putrid piece of shit just because we don’t want to vote for the other guys who are running. Is that really the message we want to send?

A vote for Rick Santorum is a vote for the 13th century. Ladies get ready to be silent, barefoot, and pregnant. Men, it’s back to an agrarian economy because Rick will kill the one we have now with a conservative approach so strangling economic growth will be measured in bales of hay.

It was all fun and games when a few mid-western iconoclasts decided to vote for the former Pennsylvania Senator. But now northern and southern voters alike are jumping on the slippery Santorum bandwagon. This is the hayride to hell where the government won’t lift a finger to help someone with a catastrophic illness pay their medical bills but a battalion of middle-aged white men want to know what’s going on inside of a woman’s vagina at all times.

I haven’t been completely happy with Obama’s performance as president, but when the general election is upon us and our only two choices are Obama and Santorum, and if we elevate Santorum? I don’t believe the phrase “may God have mercy on our souls” will be a strong enough prayer to protect us from our collective ignorance.

Posted by Ragnar at 7:18 PM No comments:

Hello my blog reading knuckleheads. I’ve been away for awhile due to illness. An infection named Bertram climbed into my nose, burrowed into my nasal cavities, and filled my sinuses up with mucous. He packed it in so tight my head started to throb and hasn’t stopped for 6 days. Oh, that Bertram.

I didn’t do much last week except swallow pills and watch TV. I channel surfed a lot and found a few things out. There are a lot of people living in the swamps of and they all have their own TV shows now. Swamp People, Swamp Hunters, Swamp Loggers, Gator Boys, Swamp Thing . . . no, wait, that was a comic book. Anyway, there are a ton of film crews in the marshes following these toothless people around while they shoot gators, speak in an accent that only they can understand and apparently live their version of the American Dream.

Also on my viewing list were CNN and MSNBC. I thought about watching Fox News but decided to keep the few brain cells I have left. What I noticed about the other alphabet news networks is every hour a new program begins: “Blah Blah with So-and-So”, and these shows are virtually identical. They all talk about whatever the big story of the day is and they all have 4 guests at the same time to discuss it. “Please welcome senior political writer for HeyIHaveAWebsite.com, Ralph Jester; former republican senator Larry Wellsley; democratic strategist Janet Frood and the janitor from this building, Earl Johnson.” After about 4 hours of this nonsense you’ve listened to the same stories until nausea has set in and your head is filled with the banal opinions of people you don’t respect or care about.

And just what the hell is a “senior political writer” at a news-based web site? Does that mean he was the first guy hired when they got their start-up money? Half of these “senior” writers look like they’re 12.

Maybe I’m just cranky from being sick but day time TV sucks. Time for my meds.