Another One Bites the Dust

Another presidential candidate has bitten the dust. Bobby Jindal ended his bid for the republican nomination.

Bobby Jindal. Do you know who I’m talking about? Governor of . Indian descent. Will use any political talking point to get attention but never actually DO anything.

It’s not surprising you can’t place him. He was polling just behind a garden rake from that was running on a platform of branding leaf blowers as terrorists.

During the debates Bobby was like the last child seated at the kid’s dinner table at Thanksgiving. He was that cousin that no one really knew because the family lived 2000 miles away and only visited over the Holidays. The kid that used the mashed potatoes as paste to glue his turkey and ham together in an abominable hybrid of two beloved meats and then smiled with palpable evil as he flung it at the 16 year old daughter of the host who just missed making the cut for the adult’s table. If only great Aunt hadn’t shown up at the last minute.

This was Bobby Jindal. The desperate wanna-be, the never-was, never-had-a-chance, the why-bother money-waster, the time-stealer, the zero-excitement-generating no-new-ideas-bringing no one listens when he talks dictionary definition of just one more politician with no self-awareness.

Bobby Jindal whose campaign slogan could have been:

Bobby Jindal, who, while talking to any crowd, always had a look on his face that said “Is this mike on?”

Bobby Jindal, who announced his candidacy by surreptitiously filming his family’s befuddled reaction when he told them he was running and then showed it to the world like he was Ashton Kutcher punking his own children. Parenting with a twist of assholishness.

To the 811 people who were supporting Bobby’s run, seek help immediately. You have deep, troubling problems that can only be solved with group therapy and pharmaceutical grade hallucinogens. Godspeed.

Bye bye Bobby.
Posted by Ragnar at 3:26 PM No comments: 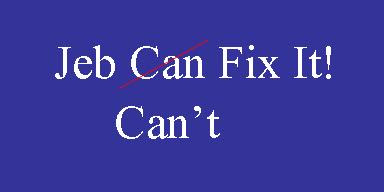 ’s 1997 southeast district manager of the year is running for president. His main reasons of course are unresolved daddy issues and that his brother George won’t stop teasing him about being governor of , the state voted the most likely to be jettisoned into the .

Jeb’s first attempt at a campaign slogan was “Jeb!” which sounded like an 80’s sitcom on Fox where by season 2 his dopey brother George was getting all the attention by saying his catchphrase “mission accomplished” after one of his hilarious high jinks. The voting public was less than enthusiastic about Jeb! preferring racist persimmon Donald Trump and his catchphrase, “Make America Pure Again”.

In a rare mid-campaign change, Jeb and his crack team of middle managers came up with: “Jeb Can Fix It”

Jeb can’t go a week without saying something stupid so I think your underlying logic for this statement is flawed. Here are some suggestions that fit better with Jeb’s strengths:

Jeb: You Voted for My Brother Twice!
Jeb Kind of Looks like Your Uncle
Jeb: Tell me what I Need to Say

I also think his campaign staff is not helping so it’s time to recruit new blood. I’ve put this ad on Craig’s List for Jeb:

Republican Presidential candidate seeks a competent direction for rudderless campaign. Also need a new slogan, a better platform and some personality. Billionaires welcome, Caucasian a plus. No chicks.

I’m sure with these changes Jeb’s campaign will lead him to stay in the race until at least March when he’ll finally see the writing on the wall of the Holiday Inn men’s room and drop out.
Posted by Ragnar at 3:59 PM No comments: