Why am I Surrounded by Idiots? 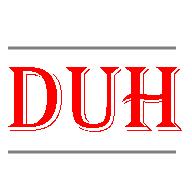 Case #1  I had gone to a Royal Farms store in to pick up an out of state newspaper, Fruit Stripe gum and bailing twine. I also thumbed through the latest issue of “Independently Wealthy Long-Legged Nordic Women Looking for Older Men: Eastern Shore Edition” but decided not to spend the money. When I left I needed to walk across the parking lot to get to my SUV. There was a pick-up truck parked next to me with his headlights on and motor running, but he hadn’t moved yet.

Case #2  I stopped at a yard sale last Friday. The house was at the side of a busy road but the shoulder was wide enough to set up a traveling carnival on. I checked out the yard sale, then played a few games of Pop-a-Shot, rode the and ate some cotton candy. When I was done I got back in my SUV.

Case #3  I went to a local supermarket which I won’t name. I’ll just say the name sounds like “wise” but is spelled Weis. I needed taco shells, maple syrup and more bailing twine. After finding my items I walked to the check-out lines. There were three registers with lights on but no one there to ring me up. I discovered why when I saw a gaggle (is “gaggle” correct, or is it a “pack”, a “shitpile” or perhaps an “annoyance” of cashiers?) of cashiers standing around talking. I stood still for a moment. One of them caught sight of me and looked up. She had a puzzled expression on her face. “Why is there someone with merchandise in their hands standing at my register? Do I have gum in my mouth or am I chewing on my tongue? Huh, I just got hit by a box of taco shells.”

She eventually turned back to the conversation with her co-workers that I’m hoping was about when they thought they would be fired for being incompetent. I had the twine wrapped around my fists ready to choke all three of them, but instead I went to the only line with someone working and sighed heavily.

Why am I surrounded by idiots?
Posted by Ragnar at 4:47 PM No comments:

Donald Trump, a cross between a russet potato and a Clementine, seems to be the likely republican candidate for president. Ted “Haters Gonna Hate” Cruz and John “Someone please vote for me” Kasich are still hanging around, even conspiring to form an unholy alliance predicted by Nostradamus.

On the democratic side Hillary Clinton, playing the woman card by being an actual woman, is inching closer to her party’s nomination with big wins in , and last Tuesday. Bernie Sanders and his dream of “Crazy Bernie’s Discount : everything must go and it’s FREE!” is still alive, but is taking on water like a fishing boat in a storm.

In the middle of all this are the American people: Divided, angry, and disorganized. “Who do we vote for?” we ask ourselves. Should we vote for the most heinous man walking the planet or Donald Trump? John Kasich? Nah, no one’s asking that.

Maybe we should vote for the first female president in American history? How about the first president that sounds like Larry David? (I don’t think the founding fathers saw that one coming)

In November 2016 we will vote for someone. When it’s all over some Americans will be happy, some will be disappointed. Many will shrug their shoulders and mumble into their Fruit Loops. Others will still be watching the network marathon of NCIS and will have forgotten to vote.

In January of 2017 a new president will be sworn in. It may be a woman, it may be a man, or it may be whatever Ted Cruz is. One thing is certain: whoever we elect is well and truly fucked.
Posted by Ragnar at 2:28 PM 1 comment: