The Adventures of Mr. Speed

Faster than a ’92 Honda Civic, more powerful than a diesel powered dump truck, able to leap the curb while making a turn, it’s . . . Mr. Speed!

Our scene opens with Mr. Speed on his way to meet his super friends at the Pennsylvania Renaissance Faire for a day of fun and frolic. As he drives happily along in his mother’s 1999 Buick Century with working air conditioning and V6 engine, his mind is wandering to other of life’s problems.

“What do fish think about all day?” Mr. Speed asked himself thoughtfully. “How many times can I legally dream about Megan Fox before it’s considered stalking?” he wondered as he drove past the York County Landfill on . “Why won’t Charlie Sheen just go away?” he pondered.

In the middle of his reverie Mr. Speed was suddenly jolted by flashing lights. Was it the aliens again, come back to finish their experiments? Had a disco opened in that empty field? Was it the opening of another Verizon store that no one would ever see anyone go into and yet it would somehow stay in business?

No! It was Mr. Speed’s sworn enemy, The Policeman from the planet . Mr. Speed pulled over wondering what nefarious plan The Policeman had. He watched carefully through the side mirror as his nemesis approached.

“So, we meet face to face for the first time Mr. Speed,” The Policeman snickered, his voice as thick as olive oil and as nasally as Celine Dion’s awful singing. There was a long pause and then The Policeman leaned in with a sinister sneer, “Do you have license, registration and proof of insurance, and I hope the answer is no!” Mr. Speed thwarted the attack by peacefully handing his documentation to The Policeman. He growled with disapproval, snatching the papers from his hand. Mr. Speed smiled.

“Do you know why I have pulled you over?” The Policeman asked.

“Because you’re an interplanetary madman bent on human destruction and I am the one person that can stop your evil reign of terror against the innocent people of Earth.”

Drat! Mr. Speed had thought that his atomic powered muon transference accelerator had blocked his true speed from land-based radar, but The Policeman had detected the extra velocity. He continued laughing as he went back to his patrol car, each chortle a slap to Mr. Speed’s already red face.

He knew The Policeman’s plan must be to give him a huge ticket, draining his bank account. Mr. Speed had to do something. Closing his eyes, he concentrated hard on the ticket The Policeman was writing. In his mind he saw the pen as it pressed down on the pad. It was writing down his address and phone number. Then it detailed his offense. Mr. Speed waited and when his mind’s eye saw the pen writing in the amount of the fine he sent a telepathic message for it to be the minimum. The pen shook in the Policeman’s hand, wanting to write down an absurdly large number. Mr. Speed drained himself of all his energy to force The Policeman to write the ticket for 45 in a 40 instead of charging him with his actual speed of Mach 3.

Mr. Speed collapsed back in his seat, sweating profusely. He saw the patrol car door open and The Policeman stride angrily toward him. The ticket was thrown at Mr. Speed’s face.

“I don’t know how you did it, but you ruined my plans Mr. Speed.”

“That’s because I fight on the side of good and not evil.”

“Whatever. Pay the fine in 10 days or I’ll swear out a galactic warrant on you and the Scarlax of Negron 5 will swallow you and divide you up between its 6 stomachs.”

The Policeman got in his patrol car and drove off. Mr. Speed sat in his mother’s car swearing softly to himself before continuing on his journey to the Renaissance Faire. The sun came out and it was a beautiful day. Until the torrential rain came.

Posted by Ragnar at 3:36 PM No comments:

Saturday Afternoon at the Movies

I ordered our tickets and handed over my gift card. The girl behind the glass looked at it, chuckled and yelled to the girl next to her, “Hey Charlene, these guys think this gift card will get them into the movie.” Charlene replied, “Aww, that’s cute.” I felt something poke me in the back and when I turned there was a mountain standing behind me.

“This is Salvatore,” the girl behind the glass said. “He’ll take you to the Regal Cinemas Financing Room. Thank you and enjoy the movie.” led my brother and me into a small room that contained a desk and another swarthy gentleman with the name tag “Vincent”. Vincent dropped a brick of money onto the desk.

“Dis is da getting’ in money for da movie. Youse will pays it back in 24 hours plus da juice.”

I was still a little hazy on “juice” but before I could ask again, Salvatore picked us up like dolls and carried us to the snack bar. He dropped us and then returned to the theater entrance where three Sherpa’s we were waiting to lead an expedition up his south face to set up base camp at his knees.

Tentatively I approached the girl behind the counter. “I have $12, what can I get for that?” I asked. “Here you go,” she replied cheerfully while handing me a straw. I looked over at my brother who, for his money, had received a palm full of melted butter.

“If you want something to go with that,” the girl continued, “here is the Regal Cinemas Snack Bar Bartering List.” I took the paper and we read:

What You Want to Order // What you Have to Give

We were hooked up by a very nice nurse named Peggy and gave our pint of blood for which we received our medium soda and popcorn. As we left the Regal Cinemas Infirmary a man was being prepped for kidney removal. He looked at us and said, “I just can’t enjoy a movie without my Jujubes.” The on-call surgeon looked a lot like the guy I had seen sweeping up popcorn and rat feces from the lobby floor.

The movie was good, we both enjoyed it, but I don’t think I’ll be going back to the cinema for a while. I’m still feeling kind of lightheaded.

Posted by Ragnar at 5:21 PM No comments:

Newt Gingrich Keeps Rolling Along . . . Off a Cliff 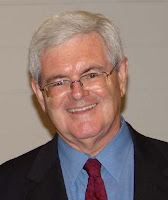 Newt Gingrich’s presidential campaign is the gift that just keeps on giving, like a bottomless bowl of fettuccine Alfredo. I don’t really want to keep writing about him because he’s such a narcissistic buffoon, but he keeps making news for the dumbest shit. His campaign went off the rails months ago. It’s lying in a ditch somewhere in , the corpse being picked over by rangy, stray dogs and families of possums. But the Newtman will not give up.

His latest explanation of why his candidacy isn’t dead is that he has more Twitter followers than any of the other republican hopefuls thus proving his popularity. Now I’m already on record as believing that Twitter may be the stupidest invention ever. It tops even the Thigh Master and the Salad Shooter in my book. But celebrities, athletes and other people who can’t stop talking about themselves seem to enjoy it. Newt has 1.3 million followers and I guess the closest to him is Sarah Palin with 600,000. So you can see how this makes Newt a viable candidate. Yeah, I don’t get it either.

Somewhere in Newt’s delusional cerebellum it all makes sense. It’s mixed up with memories of his mother telling him he’ll be the first amphibian to become president. This week, however, there was a story on the website Gawker that has thrown cold, bacteria-infested, swamp water all over Newt’s specious logic.

A former Newt Gingrich campaign worker says that most of his twitter army . . . is fake. Much like thousands of voters in a mayoral election, they don’t exist. Newt paid a company to create thousands of false twitter accounts to fluff up his numbers and make it look like he was the populist candidate. Gawker rightfully pointed out that this hadn’t been proven yet; it was just the word of a former employee.

The next day though they had a follow-up story about a web site called PeekYou who had already investigated this claim and determined that indeed, 92% of Newt’s followers on Twitter had fake names or were inactive. This number coincides with my own findings that 92% of Newt’s ideas are worthless crap.

I’m assuming that Newt will continue his amoeba-like existence, re-forming his campaign around whatever new concept his plasticized wife whispers into his hirsute ear while he files corns off of her feet and Fox News plays in the background with the sound turned down. So while I’d rather write about my latest trip to Office Max or something else stupid I’ve done, Newt could make his triumphant return at any time. You’ve been warned.