Where are All the Billionaire Candidates?

Mike Bloomberg is not running for president.

Let that sink in.

This means we only have Howard Schultz. We only have one fatuous billionaire to not vote for on the Democratic ticket in 2020.

How are we going to get through the election cycle with only one narcissistic, out-of-touch, ignorant, bloviating, pontificating, flatulent, misguided, egocentric, shit-for-brains, fuckwit billionaire to mock and spew our bile at? We’re doomed.

This is the American form of democracy. It all breaks down if billionaires aren’t trying to buy the presidency. I know that the rest of the 73 candidates are likely millionaires. So what? A millionaire compared to a billionaire is like watching the Andy Griffith Show after Don Knotts left or requesting to listen to heavy metal music and they play Bon Jovi. It’s not the same.

CNN, MSNBC, FOX and other news outlets have hours of airtime to fill with the recitation of stupid ideas, made up stories, false equivalencies and lies wrapped in prevarication. Who better to present this literally unbelievable information than billionaires who haven’t spoken to a regular American since they excoriated the parking valet at their private club for leaving a palm print on their Bugatti.

The Democrats are going to run a thousand different candidates up the flag pole to see which one can flap in the breeze strong enough to defeat Captain Meathead in 2020. More of them need to be billionaires to show us definitively who not to vote for, who can’t run the country, and who needs to hide away in their mansion and shut the hell up.
Posted by Ragnar at 2:19 PM No comments:

This past Sunday we were all hurt. Go ahead, let it out, we’re all feeling it. Football season is over and that, that is how it ended.

We expected some discomfort because we were being forced to watch the insufferable Patriots again. But the level of pain we were subjected to was a shock. Missed field goals, dropped passes, bad passes, bad officiating, missed blocks, missed tackles, punt after punt after punt, no scoring.

At the party I attended people were openly weeping, begging deities of all religions to save us. My brother converted to Rastafarianism thinking the music of Eek-a-Mouse would calm his transient nausea, but the last I saw he was in the corner mumbling about not having enough hair to grow dreadlocks. The rest of us called in a pastor for an explanation. We had done nothing wrong, so why were we being punished? As the seconds wound down on the first quarter the pastor himself was on his knees crying to the heavens “Oh God why hast thou forsaken us? They can’t even kick a field goal!”

Mid-way through the second quarter we were so lost we called in a philosopher to help us with our existential dread. His Jean-Paul Sartre quotes of “man is a useless passion” and “nothingness haunts being” were not helpful. By the time he was deep into Nietzsche’s treatise on the abyss we were angry. Punching him wasn’t soothing so we kicked him instead which acted as a mild balm for our wounds. We left him outside contemplating the puddle of snot pooling around his nose and mumbling Heidegger nonsense.

The game was a brutal examination of ineptitude that we dragged behind us like a boat anchor. “Maybe the half time show will cheer us up,” we thought. Music is a great healer.

I think it was my sister who snapped first. “Turn it off, turn it off!” she yelled. “Music isn’t supposed to sound like that!” Every note was like a pill caught in our collective throats. The air became heavy and unbreathable. With each article of clothing Adam Levine took off, the songs got exponentially worse until it sounded like a combination of Mongolian throat singing and Coldplay.

We were barely hanging onto our sanity by the time the second half started. We watched the whole 3rd quarter under the influence of peyote, hoping to hallucinate a good game. It started off ok as I saw Joe Montana riding a white stallion, throwing passes with both hands to a thousand receivers named Jerry. Unfortunately, a dragon from my niece’s delusion invaded mine and ate Montana. After that the field melted into an ice cream bar filled with trolls, loose change and multiple Walter Matthaus.

The end of the game was chaos. One of my brother’s had his head buried in the cheese dip murmuring “I can’t watch anymore, I can’t.” My sister, on the edge of a nervous breakdown since halftime, was reading Dickens loudly to drown out Tony Romo’s voice: “ ‘IT WAS THE BEST OF TIMES, IT WAS THE WORST OF TIMES . . .’ ” My other brother was on eBay trying to win an auction for an ICBM to blow up the stadium but kept getting out-bid by a penny by some Russian account. My niece took more peyote and was lying prone on the floor. “I’m righteous,” was all she said when asked any question. I was outside walking the neighborhood ringing a bell shouting “10 o’clock and all is not well, 10 o’clock and all is not well.”

What happened to all of us on Sunday was unfair. As football fans, casual gamblers and people who just like eating at parties, we deserved better. Baseball season starts in a few weeks. Perhaps the boredom of that will erase the bad memories of Super Bowl 53.
Posted by Ragnar at 2:01 PM 1 comment:

The Death of Journalism 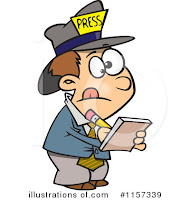 By the title of this piece you’re probably thinking it’s an erudite, in-depth look at print journalism through the decades and how it has affected all of our lives, from “Dewey defeats Truman” through Watergate to present day treatises on our divided population.

Nah. I’m not smart enough to write that 5000 words of scholarly insomnia cure.

This was an actual headline on the NY Post web site today:

Leonardo DiCaprio keeps his sunglasses on indoors at Lakers game

I searched the entire site but couldn’t find a follow-up article called:

Of course, what I really wanted was the scintillating story of:

What has happened to our nation’s newspapers? How did an actor wearing sunglasses indoors become a story? It wasn’t just a headline, there were several paragraphs breathlessly detailing Leo’s entire sartorial ensemble. The writer’s conclusion was he was wearing the sunglasses indoors to stay incognito. But that didn’t work. Another celebrity, comedian Kevin Hart, spotted Leo right away, giving him the secret Hollywood handshake and double wink of celebrity Illuminati.

Where was this headline:

I’m all for light hearted entertainment news, I read Entertainment Weekly. But this. This isn’t “news” of any kind. This is an ego-centric douche wearing sunglasses indoors like ALL egocentric douches do. It’s evolution. Once Leo was human, but with increasing fame and success he metamorphosized to a clothes-wearing douche. Once that happened, the sunglasses indoors were part of his DNA.

The NY Post didn’t have to write about it, they chose to because journalism is dead. The Post didn’t kill it, they just drove the knife in a little deeper.
Posted by Ragnar at 2:50 PM 1 comment: